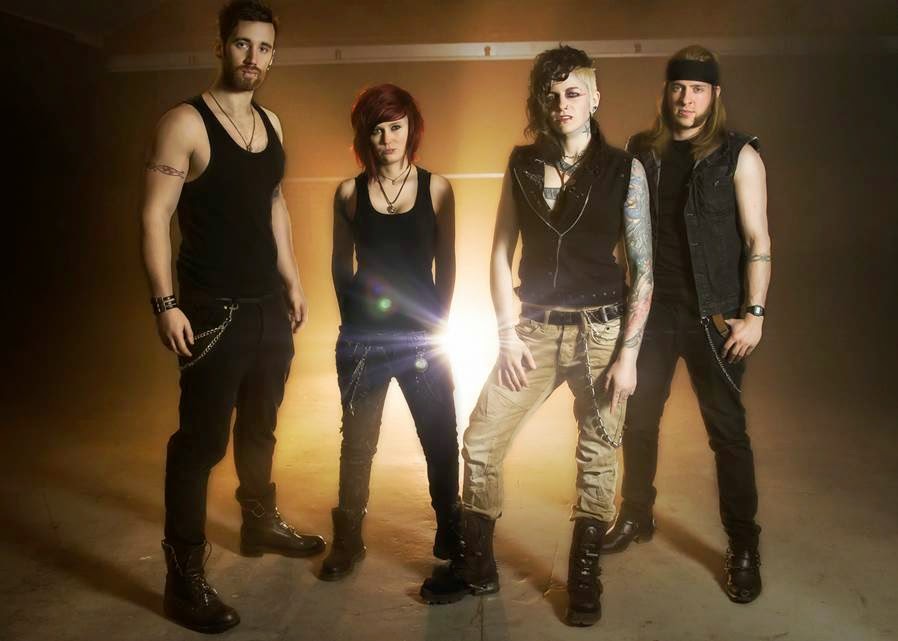 I’m not quite sure how it happened but a couple of months ago I got added to a group on Facebook called ‘I’m Unsigned.’ This group is mainly used for artists to plug their music, upcoming gigs etc. which means I have a constant supply of brand new music to listen to from artists from all over the place, and this has hooked me up with a few blog favourites in recent weeks. So say hello to my latest discovery; Chasing Dragons.

Based in Leeds Chasing Dragons are Laurie ‘Tank’ Carnan (Vocals) Mitch Sadler (Guitar, vocals) Ant Varenne (Bass, vocals) and Katie Bullock. (Drums) Since forming in 2011 these guys have been touring and releasing music at a serious rate of knots and have a built up a real hard-core following as a result.

Sometimes I like to lull you into a false sense of security and then hit you with what I really think in my reviews but today I’m throwing that out of the window. I’m going to cut straight to the chase… this record is outrageously good. We are talking record of the year, sending bands back to the drawing board to start again because they realise their new material aint going to cut it good. Hearing great music gets me excited like nothing else that I can declare on a public blog, and I can tell you that right now I’m bouncing off the freaking walls.

The prelude sets everything up perfectly, (Why do so few bands do this??!!!) the horror style whispered lyrics, the strings, then the big drums and even bigger guitars, you just get the feeling you are about to hear something game changing.

First full track ‘Throw Down Your King’ is my favourite track off the entire record. It feels like having the night of your life with your dream woman, waking up to find she has made breakfast with the promise of doing it all again. It’s full throttle stuff straight from the off, the riffs are glorious and the vocal from Carnan is seriously impressive. But the best thing about this track is that it manages to surprise you. Just past halfway through the hammering riffs drop away, to be replaced by acoustic tinged softness. It all goes a little bit middle of the road soft rock... briefly. Then my God the riffs and thunderous drums return. You’ll be head banging to the point of unconsciousness I promise you. These tempo changes and style changes mid song give the track something that just elevates it’s beyond the ordinary.

‘That’s Not Love’ is more of a straight up hard rock track driven by drums that hit so hard you feel like you’ve been in a street fight with Mike Tyson. Again the vocal is totally on point, powerful and uncompromising. But here I’ve fallen in love with the tone of the guitar for the solo, there’s something about it that just really grabs you.

‘For The Sake Of Love’ sees the heavy guitar work return with a bang on this Halestorm-esque effort. Again the guitar work from Sadler is fantastic and we get treated from the full vocal repertoire from Carnan, that’s everything from the low whisper that characterised the prelude to the lung busting power that hits you right between the eyes.

The penultimate track ‘The Last Defence’ is a real curve ball. If ‘November Rain’ era Guns N Roses teamed up with ‘Bat Out Of Hell’ era Meatloaf and sat down to put together a track, this is what it would sound like. (That is a huge compliment trust me) The song is just epic; it’s not so much a rock/metal song as an event. The piano and vocal combo that run through the opening pull you in in impressively grandiose fashion. But from the first drop of guitar we get shown the full scope of what this band is all about. The spine tingling guitar licks, the powerful vocals, the bruise inducing drums backed up by throbbing bass-lines it’s all there.

Final track ‘Broken Jaws’ was actually the first track that I heard from the band and the track that really started my interest in the first place. If no nonsense Avenged Sevenfold style hard rock is your thing then you will love this track. It serves as a great single as it shows you exactly what the band are all about without trying too hard. Plus the video is pretty awesome; so awesome I’ll drop it at the bottom of the review.

From front to back Checkmate is a hard rock and metal exhibition. I know I’ve praised the hell out of it but as you regular readers will know I don’t get this excited over a record just for effect. I genuinely believe it is one of the best records out right now, full stop. I have had the absolute privilege to review some incredible music since I started doing this and this record is right up there with the very best. If Checkmate isn’t vying for top spot on your record of the year lists come December pack up and go home because frankly you’re doing it wrong.

Checkmate is released on 2nd June
Posted by Noddy at 20:09