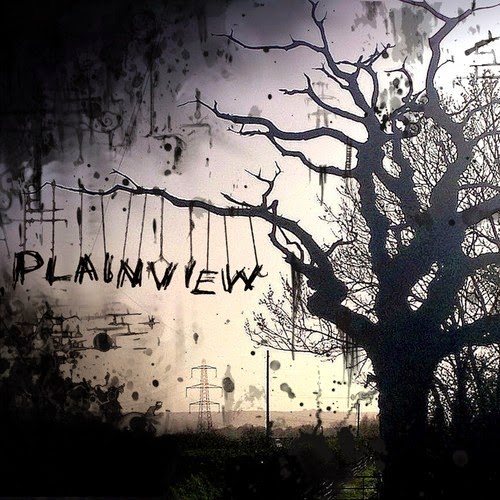 I must confess that until I got sent this album my knowledge of Plainview was totally nil. However there had been some real buzz about them earlier in the year as reports of impressive performances while supporting blog favourites Martyr De Mona came through. So when the opportunity came for me to check out the band for myself (albeit in album form) this was an opportunity I wasn’t going to pass up.

Plainview are Dave Smale (Vocals) Jonny Smale (Guitar, backing vocals) Danny Cross (Bass, backing vocals) and Chris Williams. (Drums)  Based between Brighton and London the band formed back in the early part of 2013 and wasted no time in getting to work recording and releasing this record before the end of the year. Plus little interesting fact for you lead singer Dave Smale is also currently plying his trade as bassist in The Yardbirds. (Yeah those Yardbrids)

The first thing that I learned about this album was the fact that it’s impossible to listen to it quietly; it just carries this huge sound, your fist instinct as soon as you hit play is to press ‘+’ on your speakers. That for me is the sign of a great hard rock album.

This eponymously titled effort kicks off with the anthemic ‘Slip Through Your Fingers.’ As far as opening tracks go this is one of the best I have heard for quite a while. Straight from the off it’s just in your face. The vocal is really reminiscent of Sean Harris from Diamond Head in places, I don’t know if they were an influence on the band but to this bloggers ear there is definitely a similarity there. The tone of the guitar is just sublime and the solo is equally spine-tingling. In short the track is just an anthem.
The main riff that thunders throughout ‘The Last Word’ is heavier than a bank holiday weekend in your local pub. It roars through your speakers and rips your face off. The track is like the grittiest grunge track you ever heard with that mammoth riff punctuated with the soaring vocal talents of Smale.

‘No Other Way’ slips into gear quite quickly but soon the pace drops right down giving the track a real ominous feeling through the verses. This allows the impassioned vocal Dave Smale to come to the fore once again, however I do feel that the track is slightly too long and kind of meanders to a finish instead of really going out with a bang. ‘Wasted Words’ is the shortest song on the record and isn’t heavy as what preceded it, sharing more in common with Foo Fighters than someone like Pearl Jam. But this lighter sound is no bad thing as it gives a bit of variation in radio friendly rock fashion.

I’m willing to bet large sums of money that it isn’t intentional but the start of the riff which drives through next track ‘Sins Of The Father’ has a scary similarity to Bon Jovi ‘Living On A Prayer.’ Apologies if I have ruined this track for you! Again this isn’t as heavy as the opening few tracks but like in those songs the guitar work on show from J. Smale is awesome, something which is a feature of the album as a whole. It’s a really good, solid rock track.

‘Solitaire’ finds the band in more expansive mood, the vocal swirls round you like gusts of wind in a storm, meanwhile the classic rock riff chugs along giving the impression there is something big just around the corner. And that there is, the solo shooting into life with the skill and precision that makes you want to pick up a guitar and play. ‘Take What You Want’ sees things return to a far more grungier and grimier setting with an intro as abrasive as anything you will hear anywhere. The soaring chorus is quite a contrast to the almost haunting atmosphere of the verses. If anything this is Plainview in a nutshell, grungy abrasiveness mixed with moments of straight up hard rock fit for stadiums.

‘Aino’ is just big. Big bass, big drums, big guitars, big everything. The abrasiveness of the previous track has gone but the song crashes along a similar theme. However this is probably my least favourite track on the record because as good as it is I’m not sure it really goes anywhere. Just a slight criticism but still a decent album track. Penultimate track ‘Look Away’ has more in common with a death march from a horror flick than it does a rock song but nevertheless it’s wickedly spellbinding. Think Black Sabbath ‘Electric Funeral’ and you are right there, the track trudges along with all the feel good factor of a man walking to the gallows. The lyric ‘You disgust me so’ sums up the brilliantly edge of a cliff atmosphere on show, who like happiness anyway?

For final track ‘The Writing’s On The Wall’ the band ditch the menacing darkness of ‘Look Away’ and return to what brought them to the dance, uncomplicated rock with towering vocals. We get treated to one more solo just for old time’s sake before the album winds to a close with some uncharacteristically calm and composed guitar work.

This record is like a throwback to bygone era. It’s a monstrous mix of Diamond Head style vocals, Pearl Jam’s all conquering guitars and the pure grit of Nirvana. There is a real uncompromising feel from beginning to end, this is the record Plainview wanted to make, and this is their sound, no hedging of bets. Sure, there are a couple of tracks that might be a little too long but you feel like you can let that slide to due to the sheer honesty of the album.

Plainview is as hard as they come; it’s an absolute brute of a record, and as hard rock debuts go you’ll struggle to find many better.
Posted by Noddy at 10:57