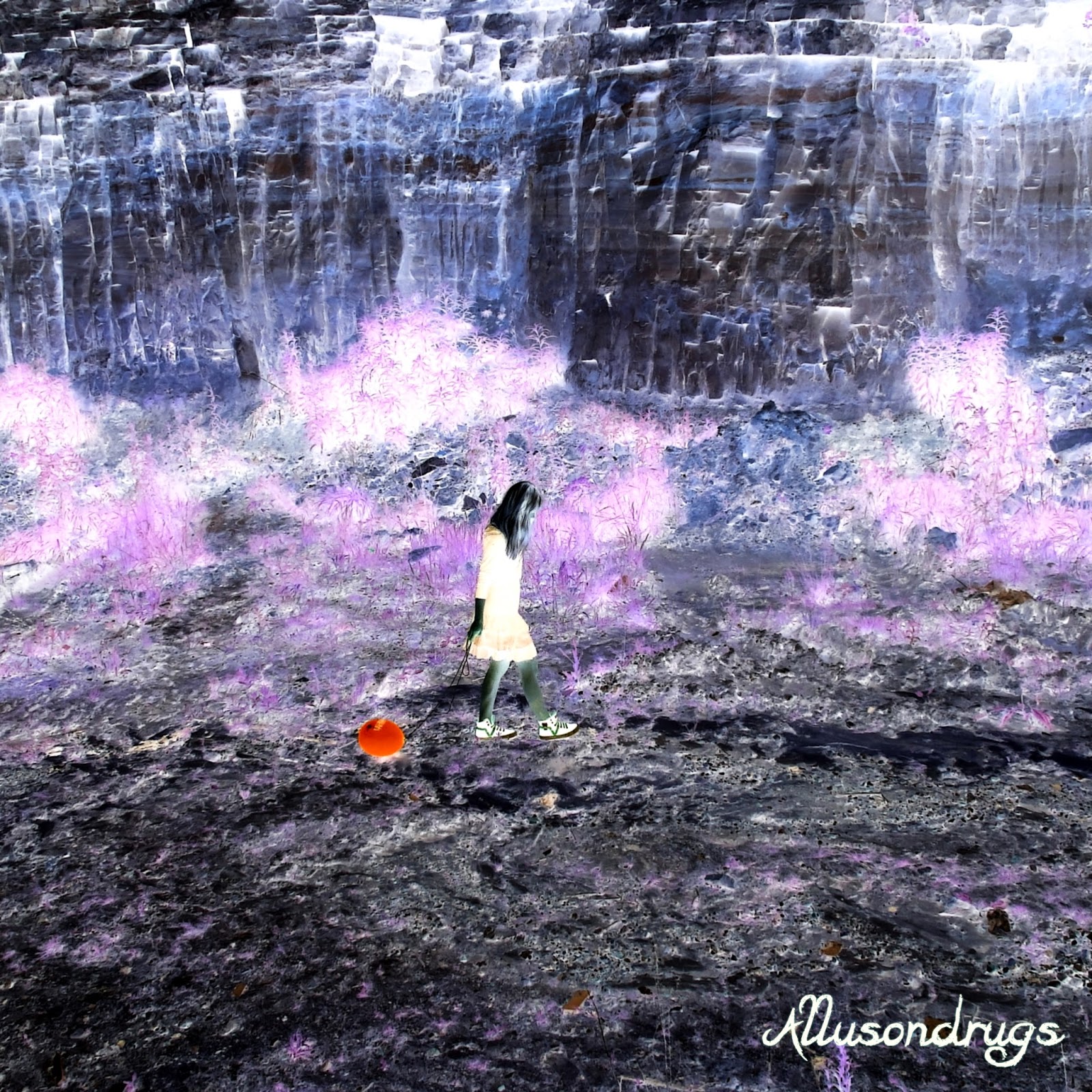 There are some bands who are ridiculously easy to review. ‘If you like x you’ll love this’ ‘Two good verses, nice chorus, good guitar solo’ job done. But then there are bands like Allusondrugs. (Brilliant name for a band by the way) Musically these guys are off the wall, but that’s the beauty of them and what makes this record such an enthralling listen.

Allusondrugs are Jason Moules (Vocals) Drey Pavlovic (Guitar) Damo Hughes (Guitar, vocals, effects) Jemal Malki (Bass) and Connor Fisher-Atack (Drums) Formed in 2012 and hailing from West Yorkshire they are really riding the crest of a wave right now having just announced a nationwide tour for September to follow on from the release of this, their eponymously titled EP which is officially released next week.

The EP itself was recorded in 1 week at Greenmount Studios in Leeds, and was tracked live to analogue tapes as the band performed while all in the same room, something which you rarely get these days. The aim was to try and capture the energy from the bands live performances on record and I have to say that having heard the vibrancy on the record they have succeeded.

Opening track ‘I’m Your Man’ is a bit of a red herring as far as the rest of the EP is concerned, it lulls you into a false sense of security. The verses have quite an indie-rock feel about them caused by the ‘light’ uncomplicated sounding guitars and the layering of the vocals. The chorus is pretty strong and the tone of the guitar which dips in and out through the duration of the track is great. Although this is one of the more radio friendly efforts from the band there are still hints towards the end of a grimier future.

‘Ted, What’s The Porn Like In Heaven’ has to be one of the best song titles that I have ever come across in my life. In contrast to the opener everything gets a whole lot grittier and heavier but that guitar tone which I mentioned earlier still remains. With no intro to speak of the listener is thrown straight into the deep end and the action is relentless for the following 3 minutes. The band list Nirvana as one of their influences and you can that influence come to fore here, not only in the gritty nature of the guitars but the vocal delivery from Moules.

Deep grungy distortion greets the arrival of ‘Cherry Pie’ before a weird psychedelic darkness descends. The brutal rawness of the vocal along with a guitar riff dirty enough to leave you needing a shower contrast against moments of psychedelic rock many thought had been left in the late 60’s. The contrast seems odd on paper but it works brilliantly, the whole track is just intense from start to finish.

One of the things which I think bands often underestimate about EP’s and albums are track listings and how the project flows together as a whole, it shouldn’t just sound like a random collection of songs. Yes the tracks need to stand up on their own but they need to flow together in one long continuous journey of peaks and troughs as well. So after the harsh uncompromising nature of ‘Cherry Pie’ what the record needed  was something to get things back on a slightly more even keel and ‘Nervous’ does that incredibly well. It’s more of a traditional rock track and has a lot more polish and gloss about it. It’s no surprise that the band have used this as a single as it would slide wonderfully well from your car radio. This might be a more respectable version of the band but it is still a very good listen.

In keeping with the theme of every song being different to the one which preceded it the sultry psychedelic strains of ‘Sunset Yellow’ gently glide you into the track. Things don’t stay mellow for too long as the guitars thunder back in for a rousing chorus. The riffs lean towards the more traditional rock end but still have hints of the bands more unconventional side.

Final track ‘Thingio’ moves from characteristically grungy beginnings through to murky moments of all out psychedelia via a slight heavy metal excursion. It’s a microcosm of the record as a whole, wide ranging and sounding like the soundtrack to the dark side.

This EP is anything but straightforward but ultimately massively rewarding. It flows effortlessly from track to track while each song brings something different to the table from the one before it. The dark grungy tones set against the flashing moments of 1960’s psychedelic rock create a mixture which is not always instant but always impressive. Even the ‘radio’ tracks have a slight edge about them.

Allusondrugs is like that girl you used to know; gloriously dirty, but with flashes of respectability when needed. A brilliant way to spend 20 minutes.

Allusondrugs is released on 21st July.
Posted by Noddy at 11:29